Now Available, Invisalign Special, Up to $800 off Treatment! 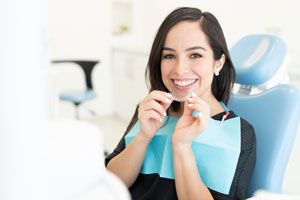 As you may have heard, there has been a revolution in orthodontic teeth straightening since you were a kid. Instead of having ugly and uncomfortable metal braces with wires and brackets that sometimes poke the gums, inside cheeks, and tongue, many can now qualify for transparent and removable plastic trays with the Invisalign process. It is not for everyone: those with complicated cases (such as a severe overbite or underbite), which need the management of an orthodontist. The trays or aligners were also not designed for children 6-12, whose permanent teeth are still coming in.

But otherwise there are several advantages over traditional braces:

These advantages do often come with a somewhat higher price than braces and you need to have the aligners replaced on a schedule recommended for your case by your cosmetic dentist (generally coming into the office every couple of months to check progress and make sure the fit is correct). Teens also need to be monitored by parents to be sure they are being worn when outside the home (an indicator dot reveals how many hours the aligners have been in the mouth).

It is important the instructions on cleaning the trays are followed. After removal, they should be washed with cool water before placing them back in the mouth. After flossing at night, wash them with soap and water.

Whatever method you choose to have your teeth (or those of your children) straightened, the increase of self-confidence once the process is completed is assured. In the case of Invisalign, so far six million patients have been delighted by the results.